Sweet and Decadent: A Brief History of Chocolate Truffles

Chocolate truffles are one of the most popular confections we love to eat. Knowing where they originated could give us a better idea about their incredible goodness.

A truffle consists of a ball of ganache made with couverture chocolate, which was then rolled in cocoa powder. However, the meaning and composition of truffles have also evolved to mean any filled chocolate to others.

The word truffle itself means “lump" in Latin, but chocolate truffles were not named that way because they look like lumps of chocolates. Instead, chocolate truffles got their name from a type of mushroom due to their physical resemblance. It was thought that the first truffle made had an irregularly shaped look, and with its earthy-brown color, it looked similar to truffle fungus.

HISTORY OF THE CHOCOLATE TRUFFLES 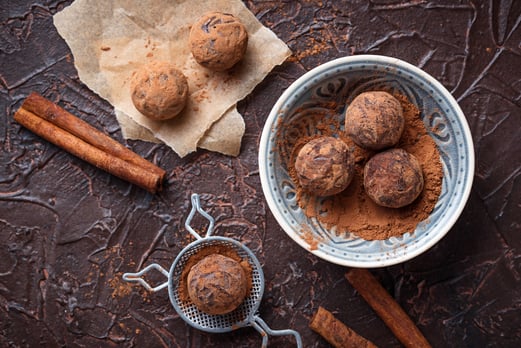 The origin of truffles can be traced to two men, Georges Escoffier and Louis Dufour. Their kitchen inventions shaped the delicious chocolate treat we all know and love today.

The invention of chocolate truffles is often attributed to an accident in the kitchen of a French chef called Georges Auguste Escoffier. The accident involved one of his apprentices making pastry cream. However, he poured the hot cream into a bowl of chopped chocolate instead of sugar and eggs. Frustrated, Escoffier yelled "ganache" to mean fool to the mess.

The creamy mixture began hardening with time, and he thought that he would roll it into a walnut-sized ball. He tried to move it into some cocoa powder, which made it look similar to a truffle mushroom. Therefore, the name truffle came into existence.

He made a batch of round-shaped ganache that he dipped into melted chocolate. Lastly, he rolled it in cocoa powder. In 1902, Antoine Dufour, who was a relative of Louis Dufour, immigrated to England. With him, he brought the truffle recipe to use in his newly opened chocolate shop.

The earliest known authentic recipe for chocolate truffles was recorded in the 19th edition of Rigby’s Reliable Candy Teacher. The book that was released in the 1920s indicated that truffles are made by dipping plain vanilla cream center in milk chocolate coating and then rolling it in macaroon coconut before it dries. The coconut-covered chocolate vanilla cream balls can then be laid on a piece of wax paper to set.

According to the author, truffles are not truffles unless filled with ganache, which is a key component of the original form conceived in France.

Since then, there have been many variations to the chocolate truffles recipe. People got creative with the coated ganache balls by adding different ingredients to the recipe, such as fruits, nuts, and even champagne. However, the mastery of making a great chocolate truffle lies in the chocolate-to-hot cream ratio, leading to different styles of ganache.

While often delicious, the latest wide range of applications of chocolate are not strictly chocolate truffles in the traditional sense of the term.

Today, the term truffle may be confusingly used to describe any filled chocolate. You can see a box labeled "chocolate truffle" and find anything from ganache-filled chocolates to nuts mixed with chocolates. They show how chocolatiers are trying to get creative with this amazing product.

That said, some professionals insist that not all chocolate with a filling is a truffle. For example, chocolate candies with fruit and cream centers are often not considered true truffles, though they are still delicious!

make your own chocolate truffles with embassy!

Get the perfect blend of sweetness and richness by using Embassy Oceanic Blend Dark Chocolate Couverture 65%!