Have you ever wondered how your favorite chocolate bar is made?

You might be surprised to find out that such a rich and creamy confection is made from the beans of a tropical evergreen tree.

Get to know the chocolate bar-making process here.

HOW IS CHOCOLATE MADE: THE BEAN TO BAR PROCESS 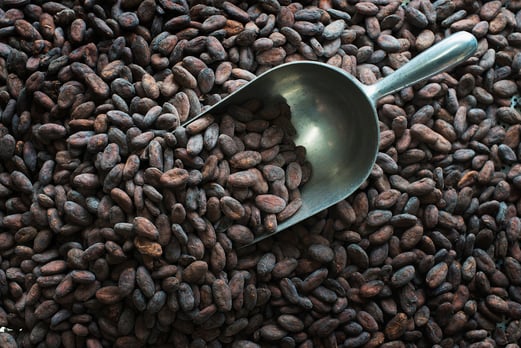 Here's an in-depth explanation of how chocolate makers transform cacao beans into those sweet milk chocolate bars that we all know and love.

The production of chocolate all starts with the cacao tree, which grows 20 degrees north and south of the equator. The cacao pods, oval fruits that range from yellow to red in color, are harvested to reveal the cocoa beans.

The bean is removed from the pod. Later, the fresh cocoa beans are then stacked on a mat or box and covered with banana leaves.

Like wine, the chocolate-making process has to go through a fermentation process. This is an important stage that forms the flavor of the resulting chocolate. Microorganisms change the chemical components inside the bean. The process takes about five to eight days, where in between, the cacao farmer turns the pile of beans to ensure the fermentation happens evenly.

Read more: What's the Difference Between Compound and Couverture Chocolate?

Cocoa beans are usually processed in another site or factory instead of right next to the cocoa plantation itself. So, the beans will be shipped to the processing plant.

Before being shipped to the factory, fermented cocoa beans typically go through a drying process. After that, they also get sorted and weighed.

When the cocoa beans arrive at the factory, before anything else they are cleaned of foreign objects. The beans are then cracked in a process called breaking, and in the winnowing process, a gust of wind separates the cocoa nibs, which are crumbled bits of the dried cacao beans, from the shell.

Roasting is an important part of chocolate production; it's what gives chocolate its signature chocolate flavor and scent. The roasting process helps form the flavor, aroma, and color. Additionally, this process kills microorganisms present in the cocoa nibs.

Read more: What's the Difference Between Compound and Couverture Chocolate?

The roasted cocoa nibs are ground until it forms a liquid paste called cocoa mass or cocoa liquor. Then, this cocoa or chocolate liquor is further pressed to extract most of the cocoa butter, which is a type of oil the cocoa nibs naturally contain. The remaining is cocoa cake, which can be powdered further into cocoa powder.

Raw materials such as cocoa mass, cocoa butter, sugar, milk powder, and other ingredients are mixed into a paste, which then goes through a refining process. In this process, a machine smoothens the ingredients so that the resulting product has a fine mouthfeel.

Conching is a complex process of stirring, heating and aeration. Conche refers to the large agitator used to stir and smoothen the mixture. It is an important process that develops and refines the texture and flavor of the chocolate.

The second to last step of the chocolate-making process is tempering. You might be familiar with this process if you’ve worked with chocolate before. The chocolate is heated, cooled, and then reheated so that the containing cocoa butter achieves its most stable form.

Tempering gives chocolate its signature characteristics: smooth and glossy in appearance, melt in the mouth but does not easily melt at room temperature, and gives a satisfying “snap” when broken.

Read more: The List of Chocolate Tempering Equipment You Must Have

After the chocolate is properly tempered, it is molded into the desired shape and then stored and shipped to the market.